What is a phoneme?

What is a phoneme? A phoneme is the smallest unit of sound in speech. There are approximately 45 phonemes in the English language, depending on different accents.

They can be put together to make words. Here is a chart of phonemes: 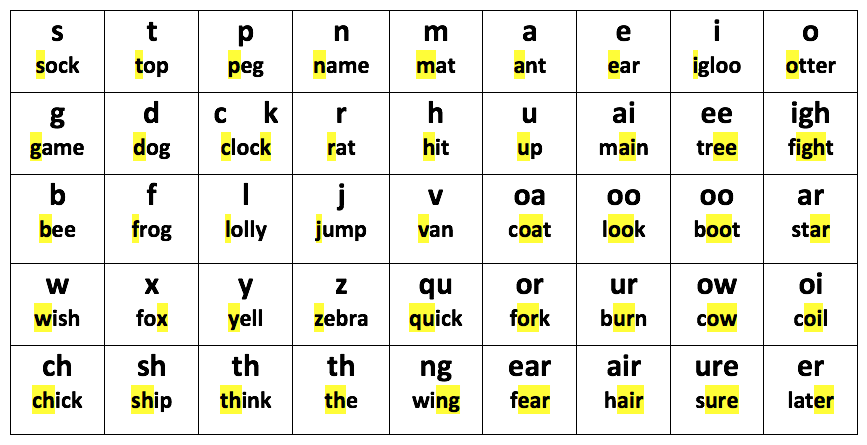 Phonics is the method used in schools to teach children how to read. Children will be taught to link the sounds of letters to the symbols we use to represent them, these symbols are called graphemes.

What are children taught about phonemes?

In reception, children start learning the letters of the alphabet and the sounds which the letters make. The next step involves children learning to read simple words, for example:

Teachers will help children do this by pointing to each letter of a word and getting the class to say them out loud one after the other. Then they will be taught how to blend the sounds together to make a word. For example:

Sometimes teachers will say a simple word to the class, such as ‘tap’, and ask children to think about which sounds make up the word and what letters are needed to form it. This is known as segmenting. Children will be taught other ‘consonant-vowel-consonant’ (CVC) words, such as ‘hat’, ‘big’, and ‘fox’.

Teachers will introduce children to consonant clusters, this is when two consonants are placed together at the start or end of a word without making a new sound. For example, when saying the word ‘stop’, you say both the ‘s’ sound and the ‘t’ sound. They are blended together but no new sound is made.

Children will then move on to learning about the type of phonemes called digraphs, which are two letters placed together to make one sound. Digraphs can be vowel digraphs, such as ‘oa’ and ‘ai’, or consonant digraphs, like ‘sh’, ‘ch’ and ‘th’. Consonant digraphs are different to consonant clusters because in digraphs the two letters join to make a new sound. Children will practice blending these with other sounds to make words, such as: ‘shop’, ‘that’, ‘chat’.

Sometimes three letters are placed together to make one sound, these are called trigraphs. Examples include: ‘ear’, ‘air’ and ‘igh’.

Next, teachers will show children that some sounds can be made in more than one way, such as the long vowel sounds ‘ai’ and ‘ee’:

Lastly, children will be taught about split diagraphs (also called ‘magic e’). This means that the vowel sound in a word has been split by a consonant. For example:

When a ‘magic e’ is added to the end of some 3 letter words, such as ‘hug’, the ‘e’ can reach over the consonant and change the vowel before it from a short sound to a long sound, like in the word ‘huge’.

Why is learning phonemes so important?

A good understanding of phonics is vital in helping children learn to read.

At the end of Year 1, children will have a Phonics Screening Check. This is a small assessment which will show if a child is confident in the phonics skills they have been taught so far, or if they need a bit of extra help.

The check will present children with words and ‘nonsense words’ that a teacher will ask them to read one-on-one. The nonsense words will be made up of phonic rules children have been taught and teachers will see if children can read them with the correct sounds. This will show if they understand the phonics rules. Example nonsense words might be ‘fim’, or ‘dat’.

How to help children with phonemes?

When reading with your child, it is a good idea to ask them to sound out a few new words which they come across, as it will help them practice their phonic decoding skills. If they are struggling to sound out the word, you could ask them to write it down on a piece of paper and then mark under each sound with a line or a dot. For example:

This exercise will help children practice blending individual sounds together. If children struggle to hear all the sounds in a word, encourage them to think about the movements that their mouths are making. Looking in mirrors can help with this.

It can also help children if they draw pictures of a familiar image which sound like the phoneme sound. For example, they could draw a bee to represent the phoneme ‘z’, as it sounds like the noise made by a buzzing bee. Drawing pictures will help make phonemes more memorable for children.

How does Learning Street help children with phonemes?

With a test at the end of year 1, and the skill vital in helping children learn to read, it is important that children have a good understanding of phonemes.